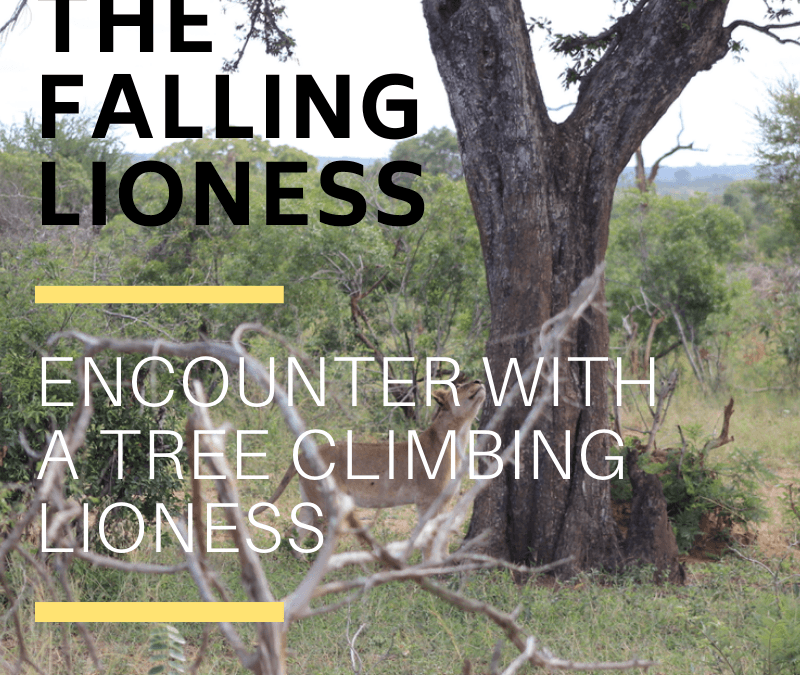 a Safari Journal by Andrew Wagner

Lions do climb trees, and when they fall, they fall hard.

Every now and then you get to experience something completely unusual and new in the Kruger National Park. Although every Safari is a treasure hunt and no two days are the same, there will always be those certain encounters that stand out, go against the norm or truly document something never seen before. This is one such account that left us and our clients stunned with awe and wonder of the incredible dynamics of nature.

This encounter follows two of our clients, Bryan and Jonathan, on a privately guided 5 Day Kruger National Park Safari experience that had stretched the full expanse of the Park from central to north and then back to the southern region. Having encountered a wide diversity of mammals, starting the trip with the very first being a Leopard and not the traditional impala, it had taken 4 days and over 400km to finally find our first Lioness. It was in the dense mopani scrub around sable dam near Phalaborwa gate. Finding her was a result of mixed intel from other private guides, a hunch and a fair amount of desperation. It was her low contact calls that alerted us to her location and with a bit of patience she appeared and offered us a few moment share in her company. Taking fours days to find your first Lioness is not typical in the Kruger National Park as there is well established population and daily encounters are had with guides and their clients. The sighting was brief as she disappeared back into the mopani scrub but it left us feeling very rewarded and of course all we needed to do was now head down south to find our final member of the Big 5 before departing. Little did we know the experience we were about to have.

The final day had arrived on our Safari and we departed from Skukuza Camp towards an area well know for its mammal diversity and we weren’t left disappointed. Around 09h00 we encountered a large Male Leopard on a rock who had recently caught and cached an Impala high up in a Jackalberry tree. We had briefly seen the Leopard on the ground who had then come down from the tree leaving his prize and disappearing off behind a rock and into a thicket. We waited it our but decided to loop around and come back a bit later to see if he would return.

On our second attempt to find the Leopard at the kill site, we arrived and turn the vehicle off and decide to wait in silence and observe. It didn’t take long and the situation changed completely. Waiting, listening and looking for any sign, the silence was broken with Bryan pointing and urgently announcing a Lioness had appeared and was making her way over to the large Jackalberry tree which had the cached Impala carcass. This certainly was a change of events and from the very first sighting of the Lioness, we could tell that she was interested in the Impala.

What we didn’t realise was just how serious the Lioness was. Lions typically don’t climb trees, they can and will if need to but its not common behaviour in the Kruger National Park to see Lions in trees. As a species they are terrestrial, hunting in pride unit using power, stealth and strategy to overcome their prey. There are accounts of Lions that do take to the trees in places such as Uganda’s Queen Elizabeth National Park with a famous documentary called the “tree climbing lions” portraying this behaviour but not in the Kruger. Even in the event that a Lion does scale a tree to scavenge a Leopard kill, these are usually smaller trees and not the 25meter tall Jackalberry in question. This does beg the question “did the Leopard know the lioness was near” and decided to take its prize high up into this riparian giant.

The next few moments escalated rather quickly. The Lioness showed clear signs of interest and made her way over to the base of the tree. After a few seconds of thoughtful gaze she had determined her route and up she went. 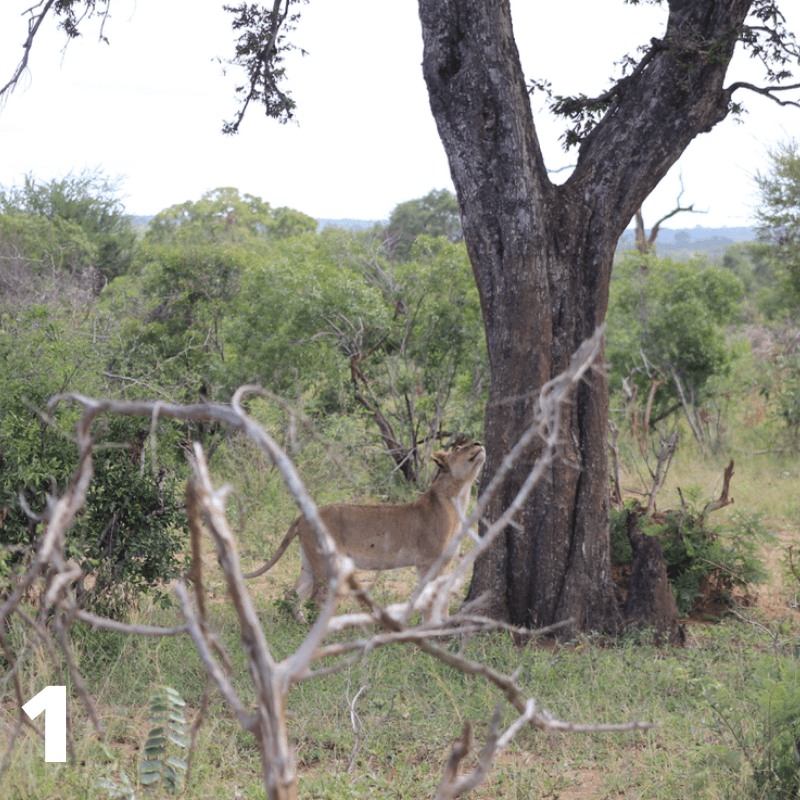 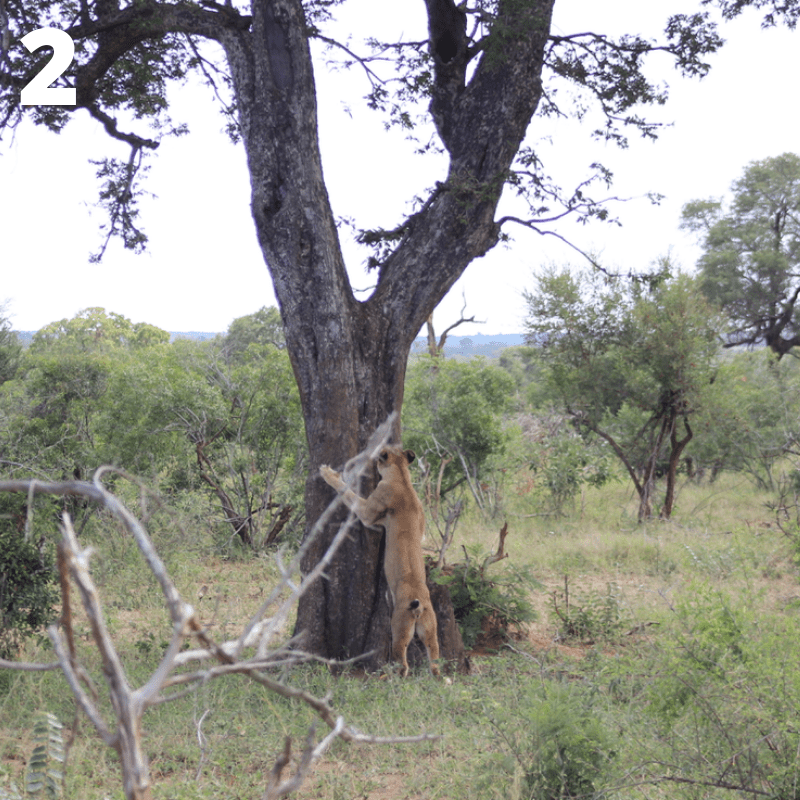 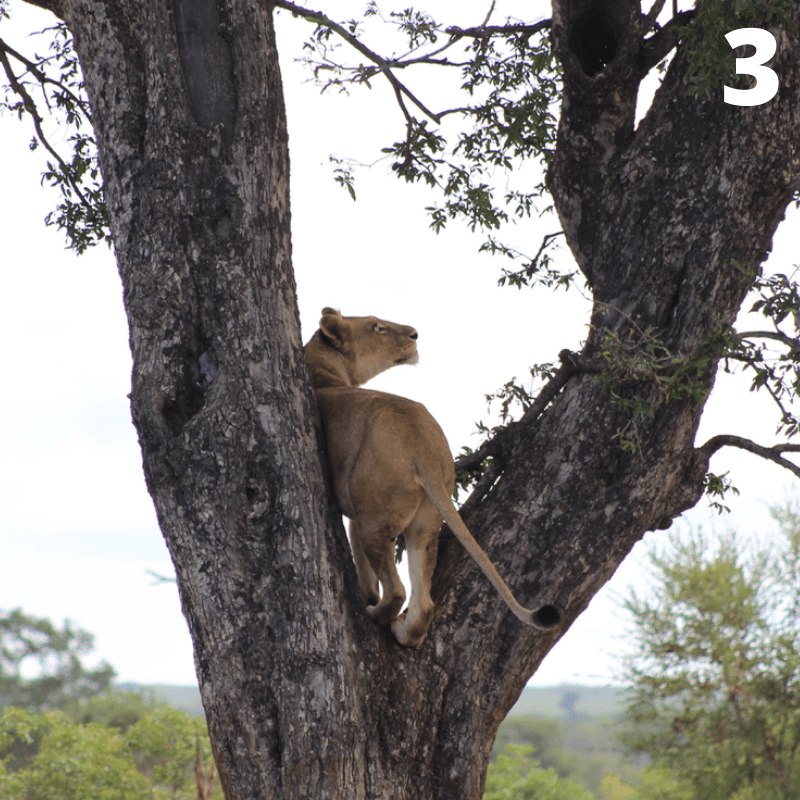 Once the Lioness had entered the tree it was absolutely clear that she was going for the Impala carcass regardless of the potential risks. The Leopard had stashed the Impala in the top corner of the tree some 15 meters off the ground. One of the reasons that Leopards stash kills high up in a tree is to particularly deter Lions. The higher up you venture the thinner the branches and of course there is far less support to provide for a 160kg female Lioness. The Leopard had followed the rule book but seemingly under estimated the desperation of this female. As you can see from the images this female in particular was in good condition and didn’t show any sign of malnutrition to drive her desperation. Lions are known scavengers of carrion and wont let an opportunity pass them bye, no matter how high up they are either. With the first section being fairly effortless it was the second section of the tree that would demand more courage and effort. 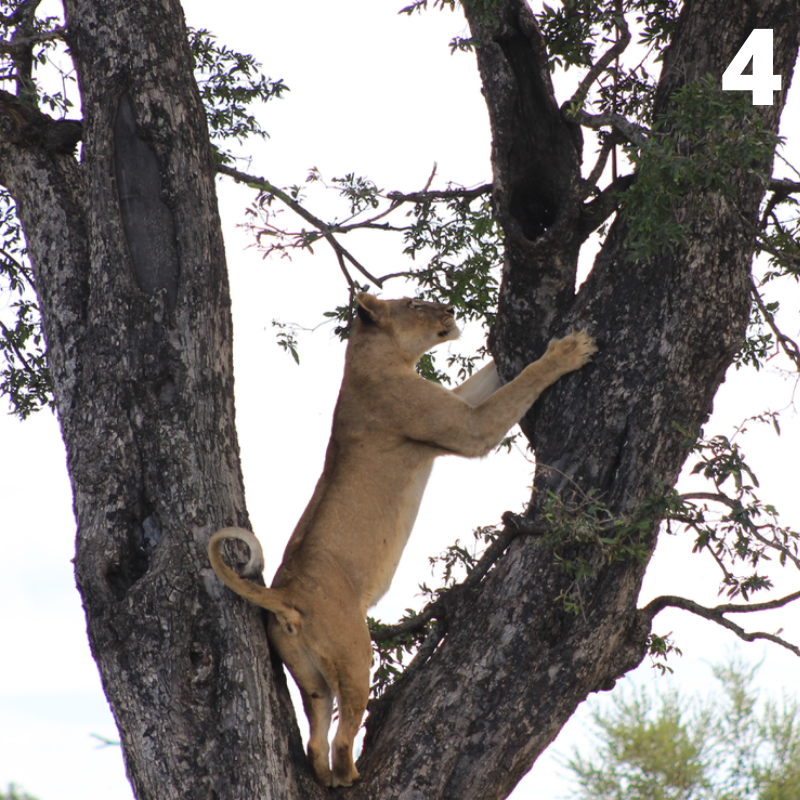 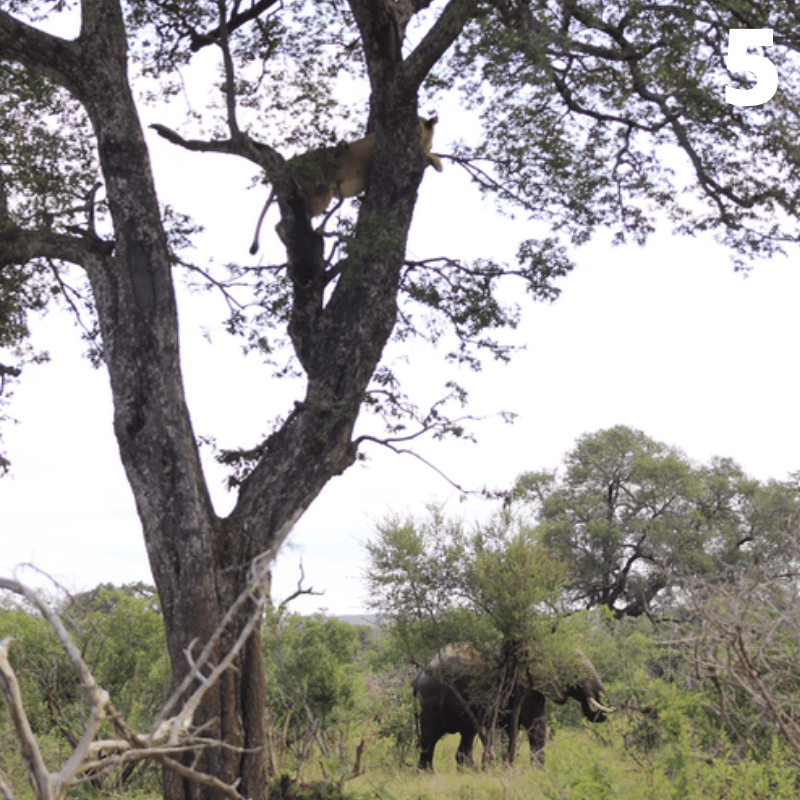 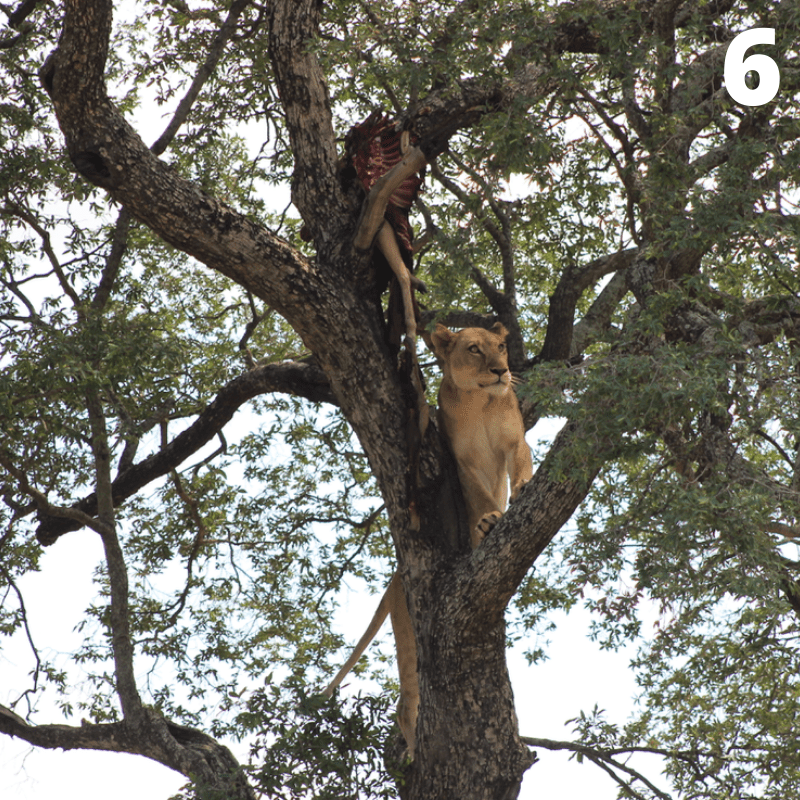 Having managed to scale the trickiest part of the tree, she finally came to a 2nd resting point where should found her breath and watched as a young bull Elephant passed by. There after it was onto the most complicated stretch that demanded balance and positioning below the Impala kill. She did this effortlessly and was finally next to the kill. She was now roughly 15 meters up the Jackalberry. This was an incredibly exciting moment for our clients Bryan and Jonathan, we had never imagined that their safari would end with such a crescendo  and a once in a life time sighting. The situation now became tense as she started to navigate her way around the kill. It seemed clear to us that she hadn’t thought of the challenges she would face in getting the kill out of the tree. She started to pull at the carcass and thats when everything changed. In one single move her balance shifted and she slipped. 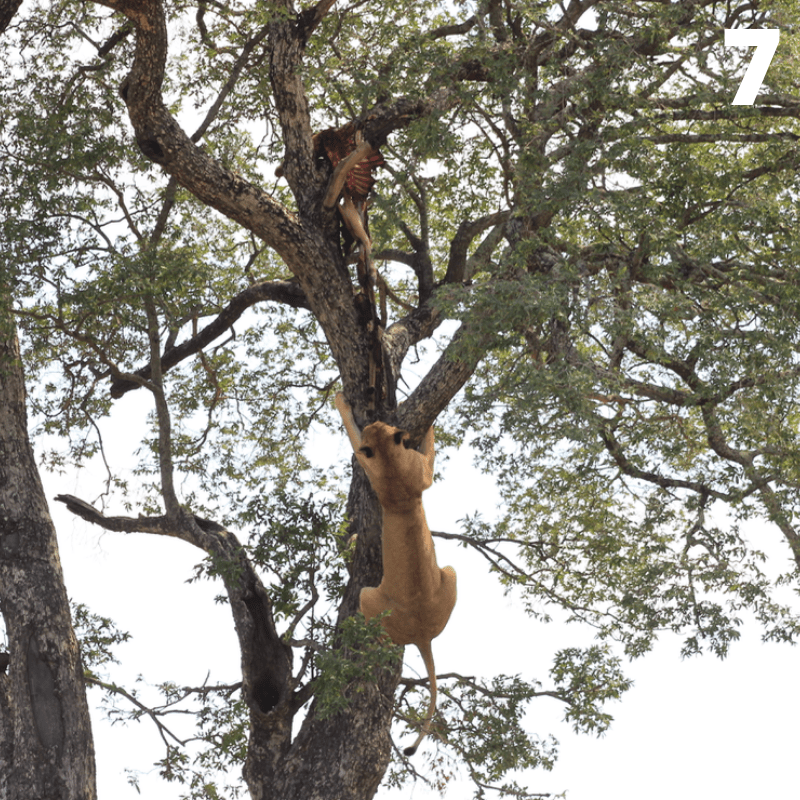 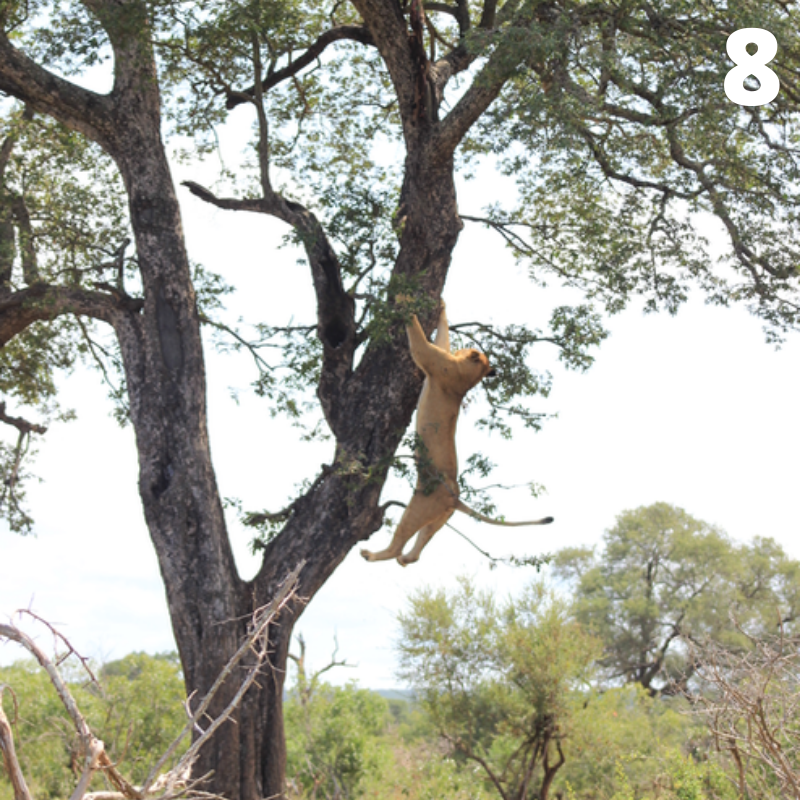 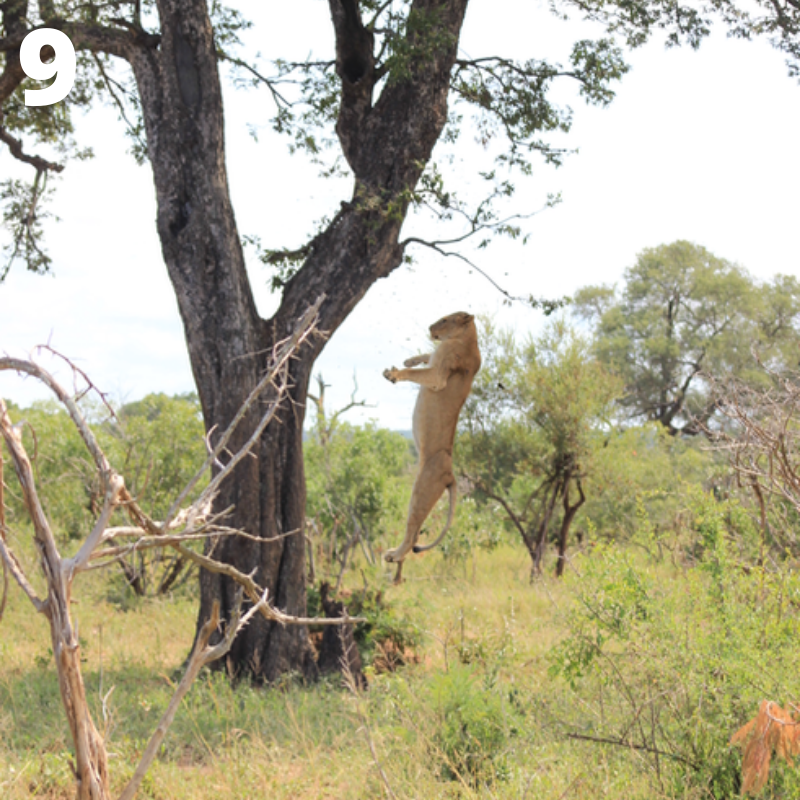 As seen in image 7, the Lioness had tried to gather some purchase on a front limb of the Impala, and shifting her wait slightly forward she was deceived by her anchor and giving way, the limb forced her into a head first free fall. She managed to turn and grab the tree with clawing herself firmly in and then holding for dear life. This was the single manoeuvre that saved her otherwise it was a head first plummet 15 meters down to terra-firma. She was soon to be outdone by gravity and her position and shear weight. As her body pulled her down and lined her out she slipped down the tree before being forced to release her grip. She fell an estimated 7 meters to the ground landing with a moan as all the air was pushed out of her lungs. Once she had landed with a loud thud we of course were worried about her condition but it didn’t take long for this courageous female to sit up and start licking her wounds. To witness a scene like this was incredibly special and a unbelievable end to our trip.

The above video was captured by a client on her mobile phone. 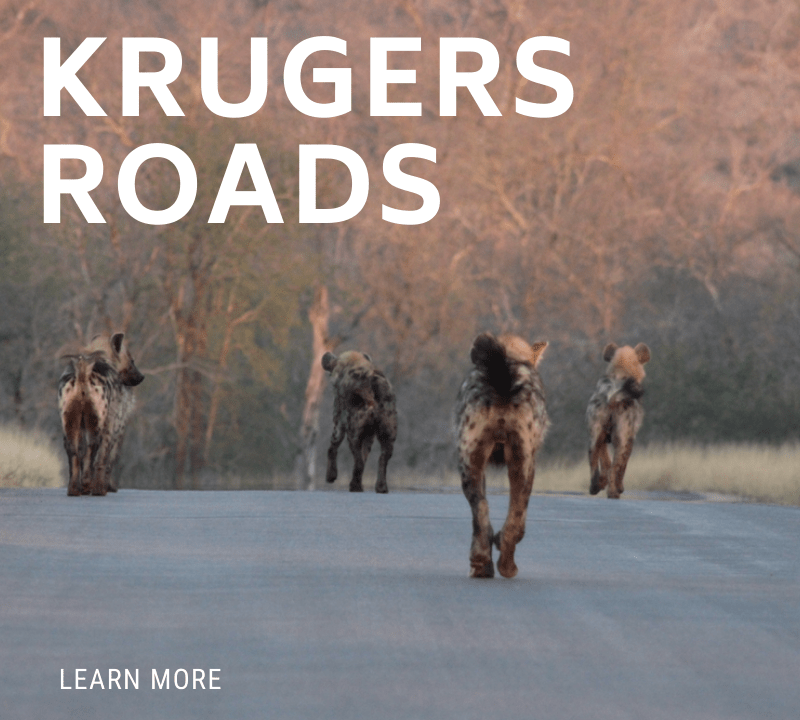 Roads of the Kruger National Park 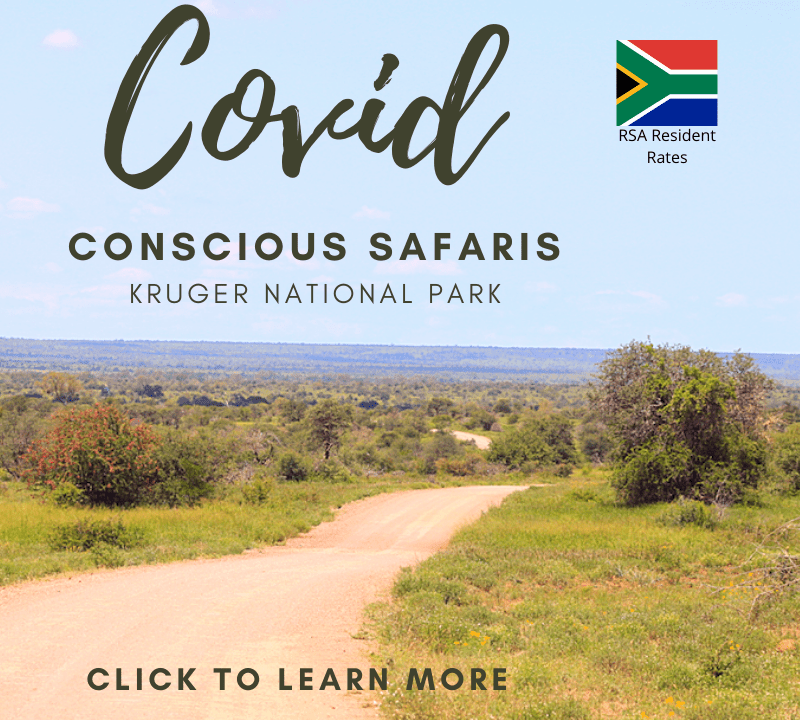